An expat guide to healthcare and health insurance in Belgium

Are you researching an expat health insurance for Belgium? It is important to learn about the local healthcare system first.

Whether you are moving to Belgium or you are already living there as an expat, read our guide to the Belgian healthcare system, your different options of medical insurance for Belgium and an overview of the average cost of local healthcare. 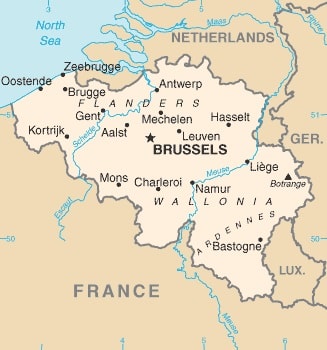 Healthcare in Belgium for expats

The Belgian social security system is universal and mandatory. For those who are working, it is divided between three schemes, one for employees, another for the self-employed and a third for civil servants. These schemes are mainly funded through contributions from the employees and employers.

The Belgian healthcare system is managed by the ‘Institut national d’assurance maladie- invalidité’ (INAMI), (National Insurance Institute for Sickness and Invalidity). It is the government agency responsible for the general running and control of healthcare and social benefits, and ensures that everyone has a sufficient healthcare cover.

Unlike countries such as France, where health services are managed by a public body, health services in Belgium are provided by private insurance companies which are regulated and supervised by law. The Belgian health system is similar in structure to the Swiss system.

The insurers that provide government regulated healthcare plans are called ‘mutuals’. There are several:

* There are 5 national unions of mutual, which are not-for-profit organisations.

* A public mutuality that operates through regional offices; Everyone is free to choose to be covered by the mutuality of their choice, except those working for the Belgian railway services who are automatically affiliated to a specific mutual.

Level of cover: Healthcare in Belgium is not free. In most cases there will be a co-payment. The maximum co-payment is, in principle, 25% for general medical care and 40% for certain specialist services. The rest is the responsibility of the insurance mutual.

The insured must pay the costs and then be reimbursed by their health insurance mutual.

For certain categories of people, the government sets a limit on out-of-pocket costs per year, limiting the amount they will need to spend on medical co-payments.

You would be fully reimbursed for a hospitalisation in a shared hospital room.

Each person has the choice to take out additional insurance, which then covers the co-payment costs.

You are able to consult the doctor of your choice.

What medical coverage for foreign workers in Belgium?

Your medical cover will depend on your status.

On secondment: If you are on secondment abroad, then you will still be affiliated to the social security system of the country you have been contracted from (e.g. you are still on a local English contract). In this situation you should be able to access healthcare in both the UK and Belgium.

Cross-border worker: If you are a cross-border worker in Belgium (e.g. salaried in Belgium, living in France), you must pay your social security contributions in Belgium and thus be affiliated to the Belgian insurance scheme. However, you have the rights to health care on both sides of the border (see http://www.santetransfrontaliere.eu/).

Expatriate in Belgium: If you are an expatriate in Belgium (resident and locally contracted), you contribute to the Belgian insurance scheme only. You can only benefit from healthcare in other European countries within the limits of use of the European Health Insurance Card (only unexpected medical care provided by the public sector is covered).

Please note that an international health insurance will not exempt you from subscribing to the Belgian social security scheme if it’s obligatory to you; it will be an additional cover on top of this.

Expat Assure helps you decide the most appropriate expat health insurance for Belgium depending on your situation and needs. Don’t hesitate to contact us for your personalised health insurance comparison.

What is the best health insurance for expats in Belgium

The best health insurance in Belgium for one expat might not be the best for you as everyone has different needs and expectations.

In order to find which one is the best health insurance in Belgium for you, it is important to consider several aspects such as your medical history, your age, your specific needs in terms of medical cover, your situation in Belgium, alongside other parameters.

Expat Assure helps you to find the international medical insurance for Belgium that best suits your profile and requirements. Contact us today to request your free and non-obligatory health insurance comparison.

How much does healthcare cost in Belgium?

Doctors: In each field of medicine, there are different categories of doctors, with varying fees:

Therefore, the rates of a consultation can vary from 15.10€ to 24.48€ (2016 costs). A consultation with a specialist can be between 20.58€ and 56.85€. The price of a consultation with a dentist varies between 21.60€ and 29.98€. There are also doctors who are not covered by the INAMI. Doctors not approved by the INAMI are free to charge fees of their choice, and these may not be reimbursed by the health insurance mutuals. To be fully repaid by these doctors you will need to take out additional insurance, either local or international.

Hospitalisation: The cost of hospitalisation is divided between you and your health insurance mutual. The hospital bill will be sent directly to the mutual with the costs covered by the mandatory health insurance scheme. If you are insured on the same basis as  a local national, the amount charged to you will be 5.44€ per day for a hospitalisation; but depending on your status, this can go up to 42.58€ for the day of admission and then 15.31€ per day for the following days. Please note, these prices do not include medication (flat rate of 0.62€ per day), or doctors’ fees as well as any supplements (e.g. single room supplement fee). For more information, the website of the Belgian health insurance includes a detailed list of all medical fees.

What is the cost of private health insurance in Belgium?

Such as with any type of health insurance, the price of a medical insurance for expats in Belgium varies greatly depending on the personal situation, the age, the medical history of each individual as well as other parameters.

No specified vaccination is required to enter Belgium but it is recommended to have your vaccination calendar up-to-date.